Warehouse workers in America have been subject to particularly sophisticated attacks on their wages, hours and working conditions over the last 15 years. A cottage industry has emerged since the new millennium: hedge fund-owned warehousing companies purchase unionized warehouses, transfer work to their non-union warehouses and abscond with the money meant for workers’ healthcare and pension funds. C&S Wholesale Grocers is the most visible agent in this conspiracy hatched on Wall Street.

This trend is evident in the decline of the unionized fraction of warehouse workers. In 2000, 8.6% of warehouse workers were represented by a trade union. In 2017, that number had dropped to 7.2%, even as the industry has grown exponentially with the rise of e-commerce in that time.

The left-labor publication In These Times reported in 2015:

“C&S, Hoffa continued, is ‘a grocery company with a notorious record of casting thousands of workers aside, destroying decent jobs and leaving taxpayers and communities with the task of picking up the pieces and cleaning up the economic fallout.’

As reported last year at In These Times, C&S has been aggressively expanding its operations, often at the expense of Teamster members. It has become almost commonplace for C&S to acquire control of Teamster-contracted warehouses, transfer the shipping work to other C&S non-union subsidiaries, and then get rid of the unionized workers, one Teamster official said. The union estimates it has lost about 4,500 jobs from such C&S union busting since 2001″

Warehouse workers in Cheektowaga, New York are now subject to a new evolution in these attacks: their original employer re-purchased their workplace in 2014 after selling it to C&S Wholesale Grocers in 2002 and then absconded with their Fund moneys as well as their raises.

In the article “Eight Years Since 2008 (and Still Broke)”, from the first issue of Anti-Capital, we reported on the history of struggle by West Virginia aluminum workers who had joined the Occupy movement as a facet of their fight for their health care benefits. In that struggle, the workers demonstrated an historic commitment to being reasonable. The New York warehouse workers have found themselves in a similar situation. They too had shown a commitment to being reasonable to secure their living conditions.

“Tops Markets sold the warehouse to C&S Wholesale Grocers in 2002, then bought the Genesee Street facility back in 2014, but the Teamsters Pension Fund–which has a governing board separate from the Teamsters union–refused to allow Tops and its union workers back into the pension fund.

Warehouse associate Daniel Sheehan could not believe the Teamsters Pension Fund would not allow teamsters back into the fund, “We got kicked out 4 years ago from our pension fund over a dispute between Tops and our pension fund.”

Over the next 4 years, the Teamsters at the warehouse set pay raises aside, opting instead to put the money into a retirement account, figuring eventually the pension fund would allow them and Tops back into the pension fund, but it never did.

This week Tops Markets announced the company had reached a tentative settlement with the Teamsters Pension Fund over their dispute, and Teamsters union leaders met with rank and file members at their union offices in Cheektowaga to tell them Tops has spent much of that retirement money for the company’s own purposes.

In February Tops filed bankruptcy, and Teamsters shop steward Scott Nowak said the union members have given up millions of dollars in pay raises they have little chance of ever getting back.

“We’ve been putting roughly $7 an hour into a pension fund–half of it being diverted raises, the other half was a negotiated benefit that Tops was to contribute. Since then that is gone.”

Over 600 warehouse workers and truck drivers at $7 an hour in worker compensation, per hour of labor per worker, over 4 years– all disappeared into the company coffers, secured by bankruptcy-protected corporate restructuring.

Ever since workers banded together to start retirement funds of their own within the old mutual benefit societies, capitalists have behaved much like birds of prey. As workers’ organizations grew larger and more powerful, so too did their retirement funds. A flood of money, compounding in size every day, came with the workers’ mass strike victories and waves of organization in the inter-war and immediate post-war period. When they couldn’t talk the workers into handing over control of these funds, they used reactionary legislation to put an end to worker-controlled pension funds. It’s no surprise that the first major legislation which regulated worker-controlled pension funds came in the form of a provision in the Taft-Hartley Act of 1947. 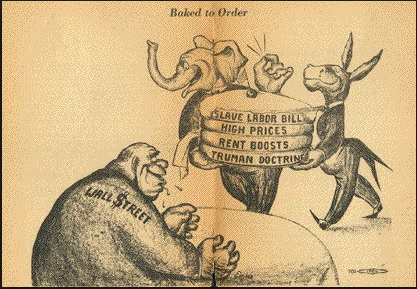 This provision had a dual purpose: to limit the power of labor and to begin a 70 year process that has left the pension fund to which the New York warehouse workers once belonged (and wish to belong to once again) slashing the benefits of Fund members, retired and working alike, by up to 30% to stay solvent.

In the words of the drafters of the pension provision to the Taft-Hartley law:

“The occasion of the amendment [the pension provision] was the demand made by the United Mine Workers of America that a tax of 10 cents a ton be levied on all coal mined, and that the tax so levied be paid into a general welfare fund to be administered by the
union for practically any purpose the union considered to come within the term ‘welfare’. Of course, the result of such a proceeding, if there is no restriction, is to build up a tremendous fund in the hands of the officers of the labor union.., which they
may use indiscriminately”

How proud the drafters would be to see the net result of their efforts:

last year, “as many as 22,600 retired coal miners and miners’ widows received notice that their pensions and health care benefits will be cut off in 60 days. . . In a press release issued yesterday, UMWA President Cecil Roberts said it’s the third such notice that miners have received since October of [2016]…”

The Teamsters’ pension funds continued to thrive and grow, much like the International Brotherhood of Teamsters itself, in spite of Taft-Hartley. It would take several more pension bills, in addition to lawsuits, injunctions, indictments and a RICO Act-based takeover of the union itself over a period covering many decades to finally kneecap the Teamsters and give the bankers and investment firms control over the Teamster funds. It also gave employers a means to either avoid their pension liabilities or simply take the workers’ retirement money outright.

American pension funds suffered tremendously in the acute crisis of 2007-08. However, looking at relatively recent OECD data from 2015 on the value of all pension funds (circa 2014) shows exactly why politicians and governments feared worker-controlled pension funds and why Wall Street couldn’t contain its insatiable need to consume them.

The architects of the abolition of worker-controlled pension funds saw in them a threat to the control exercised by capital. Funds were used to intervene against particularly hostile employers, such as by threatening to withdraw fund moneys from banks which would lend to such employers. They were used to support organizing efforts and manipulate shareholder meetings. In short, they were a threat to the omnipotent control of capital.

In 1997, “In all, the Teamsters have 170 pension funds with assets totaling $60 billion, most of them multiemployer plans. As a result of this system, which is similar to the pension funds at many other unions, the monthly benefit for a 60-year-old UPS employee with 35 years of service can run anywhere from $2,450 to $4,500, according to figures provided by UPS.”

The same report talks about the New York State Conference of Teamsters Pension Fund at the center of the warehouse workers’ fight at Tops Market today:

“By and large, benefits have been rising for UPS union employees, even as their wages have stagnated since 1987, according to a study of pension data by Prof. Ghilarducci. By 1994, the latest year for which information is available, a typical UPS driver saw pensions increase more than 60% and health benefits more than double. Some Teamster plans have done even better: monthly payments to retirees of the New York State Teamsters Conference have risen to $3,500 from $2,000 in four years, though the underfunding of the plan has fluctuated.”

Consider that in 2007, UPS agreed to pay the Central States Pension Fund $6.1 Billion to withdraw from the fund and create a new fund for their full-time employees (the new fund already had accumulated $5 Billion in total assets by 2015).

60 years after workers lost their legal right to control their own pension funds in the US, after decades of chiseling on all fronts against pensions, it was still necessary for a monstrous multinational like UPS to pay billions of dollars to fund workers’ pensions– the company was prevented from doing as they please. Even under crippling regulations and state oversight and employer chiseling, a fund controlled jointly by a labor-management board of trustees could still create such a scenario.

It’s no surprise then why the drafters of Taft-Hartley’s pension provision were terrified by the prospect of such funds under workers’ control.

Much like the Century Aluminum workers in West Virginia 7 years ago, the Tops Market warehouse workers in New York are facing a catastrophe.

Yet there is one positive commonality: both struggles occurred during a growing unrest among the working-class. In West Virginia, it was the inauguration of the Occupy movement– limited as it was to a cross-class social movement.

Today, however, this impending catastrophe facing the Tops Market warehouse workers occurs in the midst of a rising trajectory of workplace-based struggles by the working-class in America; amidst a simmering strike wave that has continued to resurface in large and small walk-outs across the country in a variety of industries and sectors.

The company may seem to have the upper hand. It looked that way to the Frontier Communications strikers as well; and it was true. But they won anyway.

Like the West Virginia aluminum workers, Tops Market warehouse workers tried to do the responsible thing.

Being irresponsible is the only course left– and in the current state of the class struggle in America, there’s a damn good chance it’ll work. 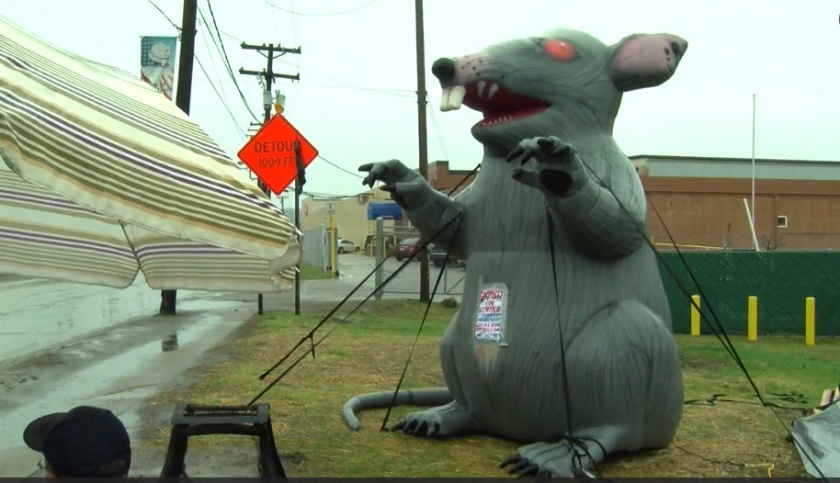